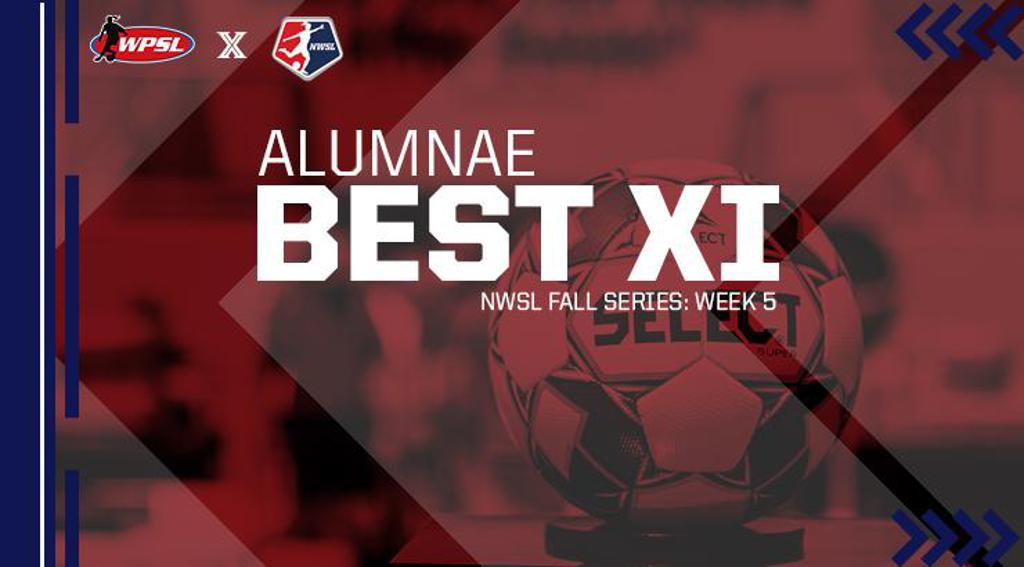 OKLAHOMA CITY, Oklahoma – The WPSL Alumnae BEST XI and Alumna of the Week has been chosen for Week 5 of the NWSL Fall Series. 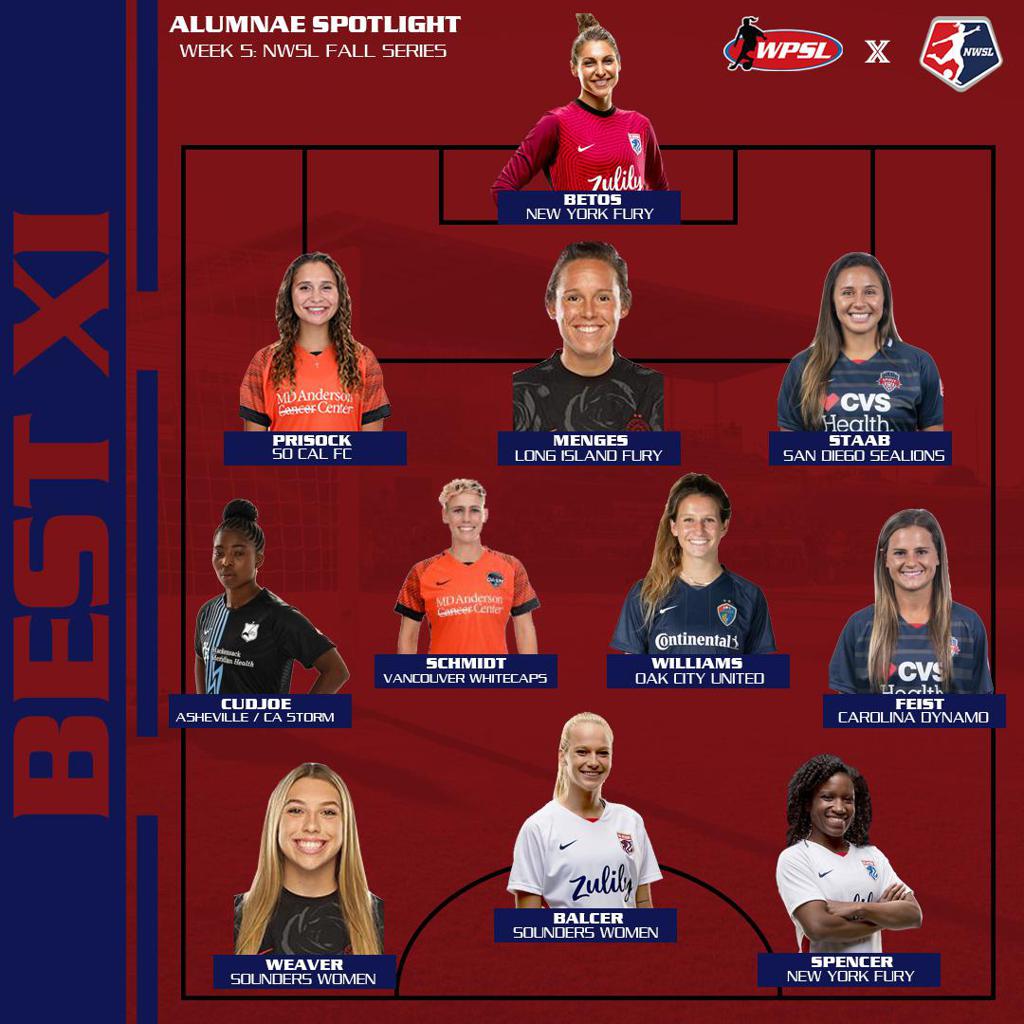 Michelle Betos (New York Fury, ’12) played and started her first match of the NWSL Fall Series with OL Reign this week as they played Portland Thorns FC. The match had originally been scheduled for earlier in the series however the wildfires on the west coast forced a rescheduling. With four saves on the night, Portland took the win with a 4-1 final score.

Betos played with New York Fury in the 2012 season of the WPSL Elite league where they went to the playoffs before falling to would-be champion Western New York Flash.

Ally Prisock (So Cal FC, ’18) started her third match of the series for Houston Dash in their match versus North Carolina Courage. Prisock has been dominate in the backfield throughout the series with 12 clearances, two blocks, and nine interceptions while holding an 86.9 percent pass success rate.

Prisock made two appearances for So Cal FC in the 2018 WPSL Season with an assist and finishing second in the table with a 5-1-4 record. Prisock was drafted in the second round with the 12th pick in the 2019 NWSL College Draft.

Emily Menges (Long Island Fury, ’09) played two matches this week with Portland Thorns FC due to their make-up match with OL Reign. Menges has been solid for the Portland backline as the club has only conceded two goals thus far in the series. Menges has tallied 12 clearances, three blocks and three interceptions with a 88.3 percent pass success rate.

Menges played for Long Island Fury, taking the club to the WPSL Championship where they beat Ajax America Women 1-0 becoming the 2009 Champions.

Sam Staab (San Diego Sealions, ’18) has four clearances, one block, five interceptions and a 86.2 percent pass success rate on the series securing her role as a starter in each of the four matches for Washington Spirit while playing the full 90’ for all.

After her 2018 season with San Diego Sealions, Staab was selected in the first round with the fourth overall draft pick in the 2019 NWSL College Draft.

Jennifer Cudjoe (Asheville City SC, California Storm) has started each of OL Reign’s three matches this series with a 75 percent tackle success rate and a 76.9 percent pass success rate. Prior to the start of the series, Cudjoe signed an multi-year contract in August after earning a roster position in an open tryout for the NWSL Challenge Cup.

Sophie Schmidt (Vancouver Whitecaps, ‘05) scored her third goal of the series this week in Houston Dash’s win over North Carolina Courage with the opening goal in the 30’. This is Schmidt’s second WPSL Alumnae Best XI feature after a goal and an assist in Week Four.

Schmidt played in the 2005 WPSL Season with the Vancouver Whitecaps making eight appearances with three assists.

Williams and Oak City United finished third in the Carolina Conference for the 2018 WPSL season. Williams was later drafted with the 40th pick in the 2019 NWSL College Draft.

Bayley Feist (Carolina Dynamo, ’18) started her fourth match of the series with Washington Spirit while playing the full 90 minutes for all. Excluding blocked shots, Feist has six total shots with three SOG and scored her first goals in the series in Washington’s second match versus Chicago Red Stars.

Feist was selected with the 17th overall pick in the 2019 NWSL College draft.

Morgan Weaver (Seattle Sounders Women, ’18) played in both of Portland’s matches this week however, earned a starting position in the draw versus Utah Royals FC. Weaver is providing a look into the future for Portland as she becomes more of a viable asset to the Thorns offense.

Weaver lead the Seattle Sounder Women to the 2018 WPSL Championship where they were crowned champions after a 3-1 win over Pensacola FC and finished the season with two goals and one assist. Weaver was drafted second overall in the 2020 NWSL College Draft.

Balcer was part of the championship team with Morgan Weaver and Seattle Sounders Women. Although Balcer was undrafted, she earned a contract after a preseason invite from OL Reign, making her the first NAIA player to sign with the NWSL and only the third player from a non-NCAA Division I program. Balcer was also named NWSL Rookie of the Year for 2019.

Jasmyne Spencer (New York Fury, ’12) came off Week 4 with an assist and was a fierce threat in OL Reign frontline this week versus Portland. Excluding the blocked shots, Spencer had six shots and proved not to led up despite the disappointing outcome.

Alumna of the Week 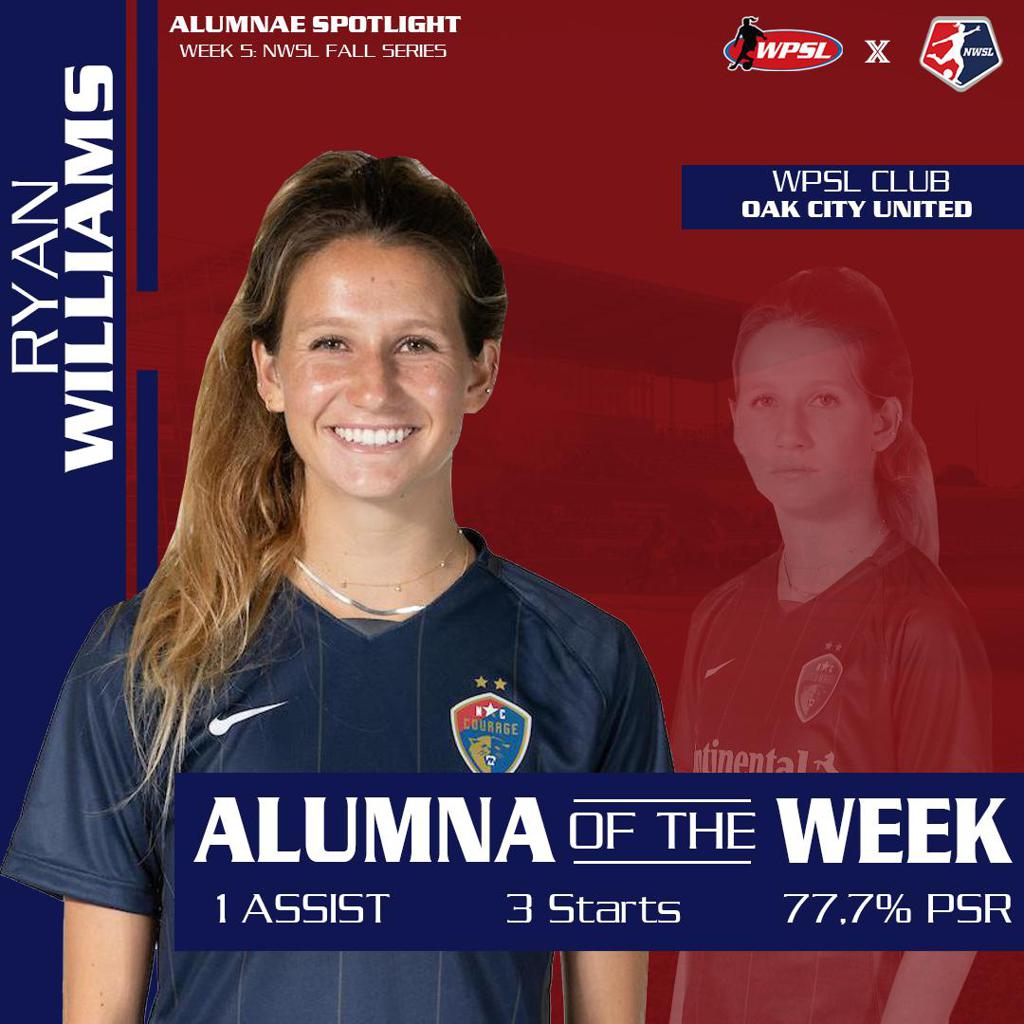